10 Amazing Facts Of Our Solar System

Our quest for knowledge about the universe is still in its infancy, and we’re constantly amazed by every new discovery we make. There are still plenty of mysteries to unravel, even here in our own little corner of the universe we call our solar system. 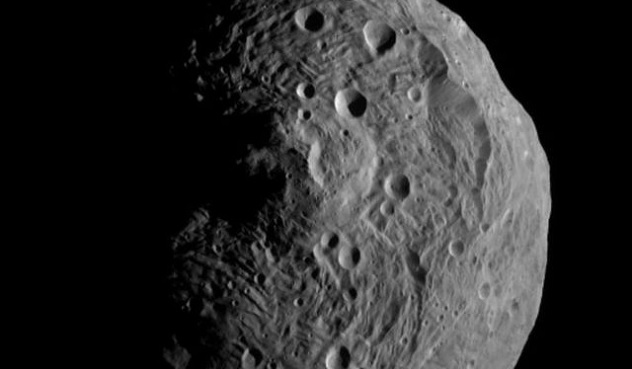 Olympus Mons is a very famous Martian mountain that dwarfs even Everest in size. At 21,900 meters (71,800 ft) in height, this volcanic mountain has long been regarded as the tallest in our entire solar system. However, arecently discovered peak located on Vesta, one of the largest asteroids in the solar system, has officially dethroned Mons. Named Rheasilvia (after the mother of Romulus and Remus) its height just barely trumps Mons by about 100 meters (330 ft). (Rheasilvia is the tallish lump in the center of the photo above.)

Of course, these kinds of measurements are not perfectly precise. Since the difference between the two is so small, it cannot be said with absolute certainty that one is taller than the other. However, Vesta appears to be in the lead so far.

Although we’ve been aware of its existence since 1997, it wasn’t until 2011, when the Dawn spacecraft went by, that we got to take a good look at Vesta. We’ve learned that Rheasilvia is actually the central mound of an absolutely gigantic crater. At a diameter of 505 kilometers (314 mi), this crater is almost the same length as the entire asteroid.

In addition, Vesta has taken quite a pummeling over the years and is full of impact craters such as Veneneia, which is partially obscured by Rheasilvia and about 100 kilometers (62 mi) smaller in diameter. 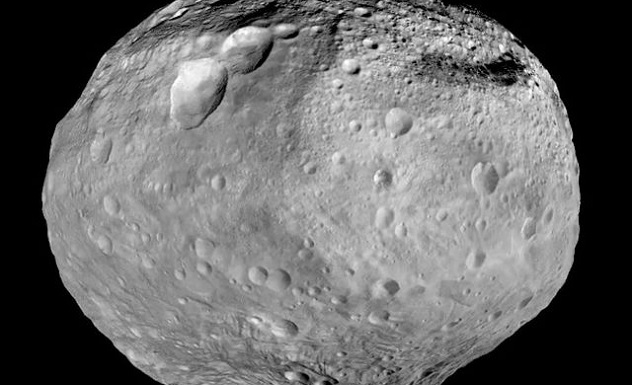 Pallas earns the distinction of largest asteroid, but only under certain circumstances. First, we have to look at Ceres, the first asteroid ever discovered and by far the largest. In fact, it accounts for about a third of all the mass in the asteroid belt (Pallas comes in third place with 7 percent). This means that Ceres can still technically be considered the largest asteroid even though it has been reclassified as a dwarf planet.

Pallas also has competition from the aforementioned Vesta (pictured here again). Even though Vesta wins in terms of mass, as it is actually heavier than Pallas, the latter is larger by volume. However, Pallas might not retain the title for long, as new Hubble images reveal it to actually be a dynamic protoplanet. Instead of merely being a giant ball of rock and ice, it actually experiences internal changes, with shifting dark and light areas. This means that it’s a valid candidate for relabeling as a dwarf planet in the near future. 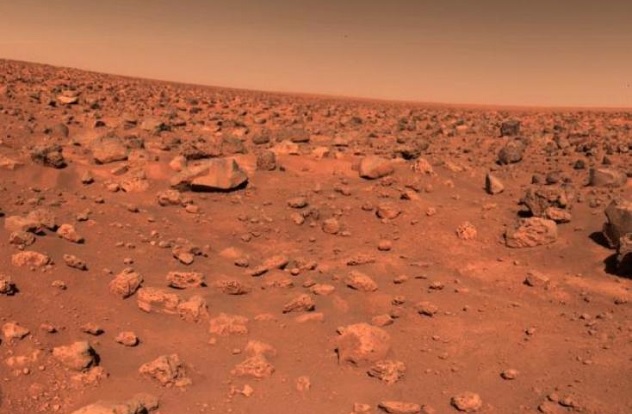 Currently, there are actually three candidates that could claim the title of largest impact crater, which goes to show how quickly our perception of the universe can change and evolve as our knowledge increases.

Interestingly, all three of these craters are on Mars. The first one is called Hellas Planitia. With a diameter of 2,300 kilometers (1,400 mi), this is the smallest crater out of all the candidates. However, it is also the only one which we know for sure was actually formed as the result of an impact.

Even so, evidence from Utopia Planitia has all but confirmed it being an impact crater as well. With a diameter of 3,300 kilometers (2,050 mi), it is significantly larger than Hellas Planitia.

And it is possible that both of them are tiny compared to the actual largest crater in the solar system. Called the Borealis Basin (pictured above), it has a massive diameter of 8,500 kilometers (5,300 mi), almost three times as large as Utopia Planitia. However, it has not yet been confirmed as an impact crater. If it is, it would have to be the result of an enormous impact, and its formation could give us valuable insight into the creation of Mars as a planet.

Volcanic activity is not as common as you might expect in the solar system. Although plenty of celestial bodies, like Mars and even our Moon, show signs of ancient volcanic activity, there are only four confirmed bodies that still have it to this day. In addition to Earth, there are three volcanic moons: Triton (a moon of Neptune), Io (a moon of Jupiter), and Enceladus (a moon of Saturn).

Out of all these, Io is the most active. Images taken of the satellite have detected around 150 volcanoes, leading astronomers to believe that there ultimately may be as many as 400 total. This is amazing because, given its icy surface and distance from the Sun, it’s a surprise that Io has any volcanic activity at all.

The leading theory as to how such a cold place maintains a hot interior is that Io’s volcanic activity occurs via internal friction. The moon is constantly deforming internally due to exterior pulls—the obvious (and gigantic) pull of Jupiter, and the pull of two larger moons (Ganymede and Europa). This opposition creates strong internal tides, which produce enough friction to generate the heat necessary to maintain the activity of the volcanoes.

6.Largest Object In The Solar System

Representing 99 percent of the mass in the solar system, the Sun is the largest object by far. However, in 2007, for just a brief period, a comet actually became larger than the Sun.

Okay, it wasn’t really the comet itself that grew, but the coma––the nebulous region surrounding the comet made out of ice and dust. 17P Holmes was discovered in 1892 by its namesake, astronomer Edwin Holmes. Since then, we’ve tried to keep an eye on it despite losing it for about 60 years between 1906 and 1964.

It is not uncommon for a comet to experience an outburst in brightness. But on October 23, 2007, Comet Holmes unexpectedly underwent a change in brightness by a factor of half a million. It was the biggest comet outburst ever recorded, noticeable to the naked eye (though people looking at it most likely thought they were seeing a star). Over the next month, the coma kept expanding, until it reached its peak at a diameter of 1.4 million kilometers (870,000 mi), officially becoming larger than the Sun.

As of now, we still don’t know exactly why this outburst happened, meaning Comet 17P Holmes is likely to fascinate astronomers for years to come. 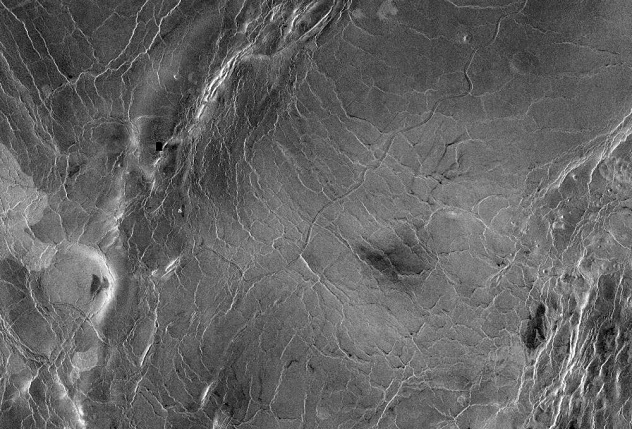 In 1989, the Magellan spacecraft was launched in an effort to visit our neighboring twin, Venus, and perform a detailed mapping of its surface. It provided us with tons of valuable information regarding its geography and, in 1991, also discovered the longest known channel in our solar system. It was later named the Baltis Vallis, and it measures around 6,800 kilometers (4,225 mi) in length.

It was subsequently discovered that Venus has numerous similar channels on its surface, though none of them approach Baltis Vallis in length. What puzzles astronomers more is their creation. There aren’t many things that could create these channels due to Venus’s harsh conditions. Surface pressure there is 90 times that of Earth, and temperatures can reach 462 degrees Celsius (864 °F).

So far, lava is the primary candidate—other Venusian channels appear to culminate in flows of lava, which would indicate that they were carved by molten lava after volcanic eruptions. These kinds of lava channels are unlike anything we have on Earth, although it’s likely that similar features were present on our planet as well, billions of years ago. 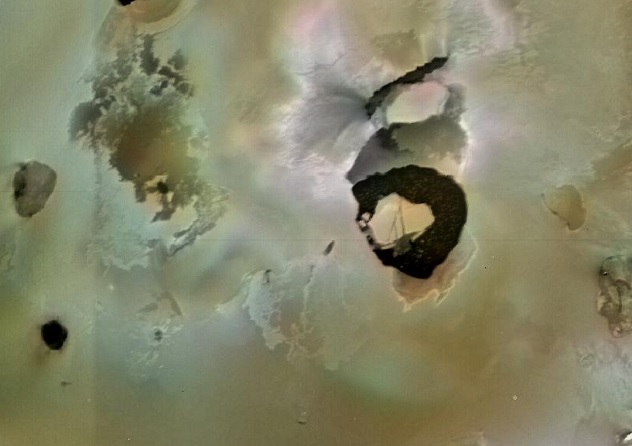 We’ve already mentioned that Jupiter’s moon Io is one of the few bodies in the solar system still volcanically active. And it is very, very active. All of that molten lava has to end up somewhere, and oftentimes it results in the formation of lava lakes. One of them, named Loki Patera, is the largest lava lake in the entire solar system.

These hellish sights can be found on Earth as well, though none are currently active. The largest one is Mount Nyiragongo in the Democratic Republic of Congo, which can reach up to 700 meters (2,300 ft) in diameter. However, geographical evidence suggests that the Masaya Volcano in Nicaragua formed an even larger lava lake in the past, reaching up to 1 kilometer (0.6 mi) in diameter.

All of this helps put Loki Patera into perspective, because it has a diameter ofaround 200 kilometers (124 mi). Granted, its total surface area isn’t directly proportional because the lake has an unusual “U” shape, but it is still absolutely massive. It’s almost twice as big as Gish Bar Patera, the next largest lava lake on Io with a diameter of 106 kilometers (66 mi). 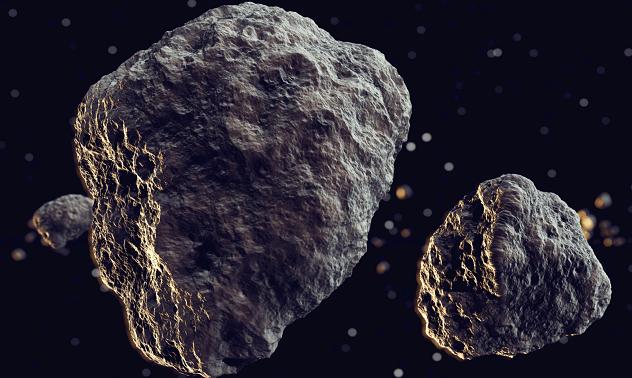 Despite all of our research, we are still not 100 percent sure how asteroids are formed. We currently have two leading hypotheses: They might have formed the same way as planets do (chunks of material flying through space collided with other chunks and got bigger and bigger), or they may have been an ancient planet between Mars and Jupiter whose total obliteration led to the creation of the asteroid belt.

Our understanding of asteroids has improved since 2008 though, when researchers at the observatory on top of Mauna Kea in Hawaii found the oldest-known asteroids in our solar system. At an estimated 4.55 billion years old, these asteroids are much older than any of the meteorites that landed on Earth. In fact, they are almost as old as our solar system itself.

Their age was estimated by analyzing their composition through the color spectrum reflected from their surface. It was established that all three of the asteroids are incredibly rich in aluminum and calcium, much more than any other space rock we have ever recovered.

Comet Hyakutake, also commonly referred to as the Great Comet of 1996, holds the distinction of having the longest tail ever, by far. The term “great comet” isn’t used just to make it sound more dramatic. Although not a technical term, it is used to refer to comets that become very bright and easily visible to the naked eye.

When Hyakutake passed us by in 1996, it was the closest any comet had come to Earth in over a decade. As expected, the comet provided astronomers and amateur photographers everywhere with an exceptional sight as it passed through the sky. However, nobody quite expected it to reach the lengths that it did. The tail kept growing and growing until it officially became the longest tail ever recorded in history.

Besides being a record holder, Hyakutake also provided us with valuable insight regarding the formation of our solar system. Chemical analysis revealed that the comet contained ethane and methane. This was the first time such gases were found in comets, strongly suggesting the existence of at least two distinct types of comets. 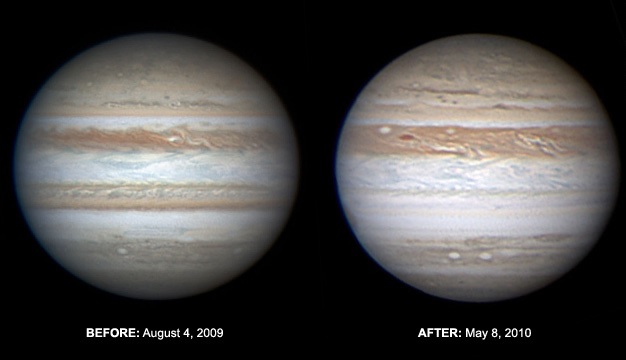 Being the largest planet in the solar system, it shouldn’t surprise anyone that Jupiter is home to some really odd meteorological behavior. Most people are already familiar with the planet’s giant storm known as the Great Red Spot.

However, anyone who’s ever seen an image of Jupiter will also recognize another distinguishing feature—the two red stripes crossing the planet parallel to each other. In May 2010, something bizarre happened to the lower stripe, known as the South Equatorial Belt—it disappeared.

This took astronomers completely by surprise—nobody had any idea why it happened. Several hypotheses were being formed when, in November 2010, the stripe started coming back. Infrared images showed that the belt was regaining its reddish-brownish color, and astronomers formulated a plausible hypothesis why: White clouds formed out of ammonia ice started flowing at a higher altitude than the brown clouds, thus obscuring them from view.

This phenomenon appears to take place once every few decades, and it usually lasts for a year or so. Of course, there is still much to learn about why this happens in the first place. As far as we know, this is the only example of such a phenomenon in the entire solar system. To add to the intrigue and mystery, Jupiter’s Northern Belt doesn’t appear to ever go through the same changes.